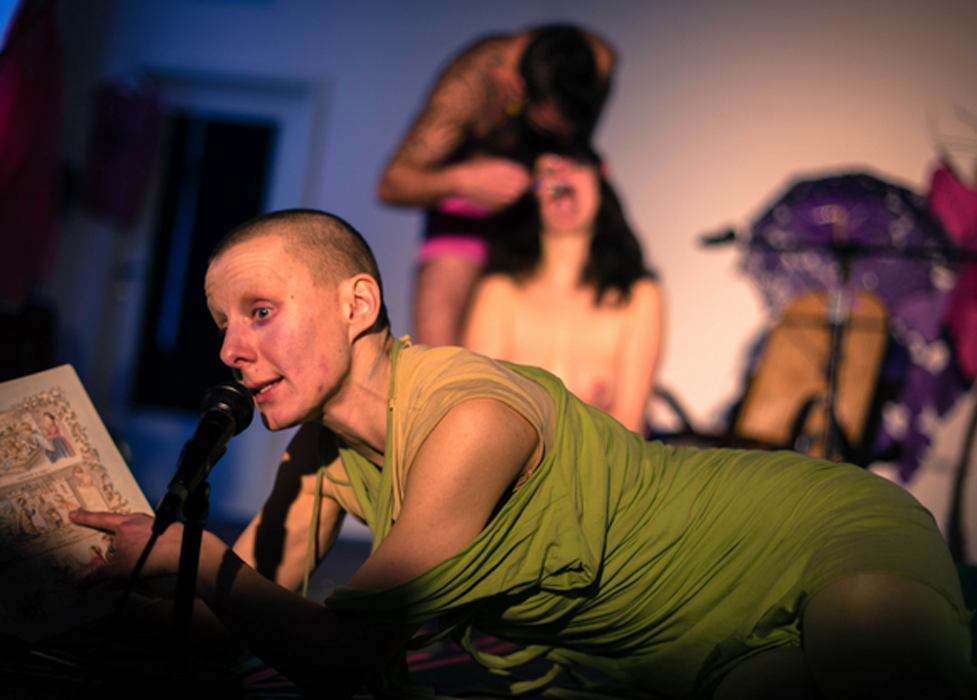 Kathryn Fischer alias Mad Kate describes in her text  what queering family means to her. How she found her way in doing so and continues to find it decision by decision. She argues that it is not enough to deny heteronormative forms, but advocates understanding each relationship, each person, as a singular occurrence, a unique combination of genders with unique, participatory abilities.

Since this is about resistance, I’d like to say that resisting nuclear family was not one decision or one solution, but a series of many choices that I made, circumstances that happened to me, and choices I continue to make.
I am a firm believer that nothing is ever final and concluded, we only make decisions as a step in a long process of understanding ourselves and others. So I’d like to say secondly: I’m no expert, I’m just stumbling through this life trying to make decisions that feel right to me. In that, I often fail to resist, I consent to structures of violence, I continue to feel rage within me that has to be acknowledged and redirected.
The bottom line for me is that we (chosen)families figure out how to love and live with each other. And this is perhaps why I’d like to think about queering resistance. That is, instead of placing ourselves in opposition to, I propose we think about choosing, affirming, and seeing others’ queer skills.
I suggest this in part because I don’t believe that simply by rejecting heteronormative forms have (we) done enough, nor will (we) necessarily find fulfillment. We may even find that we are afraid to ask for exactly what we do want out of fear of being too “straight” (e.g., a committed monogamous partner who wants to live with us and have children with us).

Because what does it mean to queer ourselves? It’s certainly not just about the ways in which we actually have sex, at least I don’t think so. And a queer family is not just about making a nuclear family with someone of the same “sex”.  Queering ourselves and our families, I think, has something to do with the way that we see our own dynamic, fluid, identities—not just in gender, but in many aspects of our identities—as well as that of others. In other words, seeing ourselves as poly—multi—dimensional. And this is how queering ourselves connects for me to two big ideas: one is poly/multi, and one is affirmation/choosing.
I think its important to mention the way that any family is lived polyamory. I’m not speaking of its sexual or kinky associations. It seems to me that poly-amory—loving many people—is exactly what a new family suddenly finds itself struggling to do. How do you balance the love you have for your child or your partner with the new love you find in a new child (or an older person you find yourself caring for), and how do you share time and attention, expectation and understanding?

I think its wise to think of each relationship, each person, as a singular instance, a unique combination of genders with a unique set of skills to share. Polyamory depends on recognizing that in others and trusting that in ourselves. And just as we are constantly reinventing ourselves, allowing ourselves to change, we also have to allow others to change and live out queer identities over time. We are left to choose the skills and values we want in our lives, and to recognize what people are rather than what they are not. Nothing is fixed, and as multidimensional human beings, all we can do it accept and understand the gifts that various people can give us at any time and seek out many different kinds of arrangements to find what we need and who we need to learn from.

So what does this mean in practical terms ?
I suppose it begins with seeing what it is that we do want from our families (does it even involve raising children? Does it mean we cook with each other each day? Do we live in the same house?)–and then working towards gathering our team. This is the essence of a queer family. There are people out there that want to bear children, others that want to raise children, still others that want only to play with children, others that want to teach children, some people that want to take part in many or none of those things. There are people who are great cooks, handy plumbers, creative at getting out of problems, smart with money—queers know better than anyone that none of these have to do with body or gender.
When I dreamed up my ideal co-parents, they were people to whom sex and body and gender were free of shame, a palette with which to engage and change, where lines between public and private could be blurred and renegotiated. They were people with whom the rituals of insemination, pregnancy and labour would not be the realm of one person, one partner. They/we would welcome the blood and labour of the birth and embrace the pregnant and labouring body as spiritual and sexual, all before the child would arrive.

I wanted to have a multi-layered family that could ground itself in many pillars of support—people. It would not depend on one, unchanging home, or one relationship staying exactly the same forever in order to make “the family” functional. If a family depends on the idea that a man and woman are always having romantic sex with each other, there is a lot going against them. So many partnerships fall apart when the sex changes or ends—as thought that’s all there is to partnership. But the resonating effects of that “break” rather than “transition” are huge. Establishing relationships based on agreements about what we can be with each other might not be the same kinds of contracts we make with lovers. If we depend on never changing in order to form family, we encounter struggle. “Queering our families” means being open to change—as scary as that can be. But the more pillars of support, the easier it is to transition.
I also wanted to create a structure that did not depend on any of us amassing a lot of wealth, not just because we don’t have a lot of money but because I don’t value having a lot of money, and I don’t want to set up my life in a way that depends on me finding a particular job in order to earn a lot of it. Moreover, queerness and consumption are interrelated; as we queer ourselves in the world we understand that we are part of a larger structure of violence that is connected to every other unique body. As queers it seems we cannot raise the next generation in a bubble which refuses to see the way that we are part of this structure—where one person’s privilege means another person’s exploitation. Being sensitive to this and understanding how to share resources and live in ways that are least extractive as possible is central to queering ourselves—our origins, our sense of birthright, our sense of exceptionalism, of authenticity, ownership.

So let’s get to the dirty details — lived daily experience, which can be a world away from intention. On a daily basis, each of us three parents has a unique name (mama papa dada), our own home, our own partner(s) and our own networks of first “go-to” childcare supports. We each have our own unique genders and pronouns, and friends and allies who give our kid a lot of opportunities to see examples of queer and trans* bodies, to see bodies that look different from their preferred gender pronoun. Its not “given” for our kid that a person with a penis is a “he” or that she has any particular skills; there are many combinations of bodies and gender that fit just fine.

The negative sides to this are that sometimes that we feel like single parents, each of us, or that we cant find time to get together. Or that two of us might argue and disagree about certain values, or that we don’t always get to see what the other persons’ parenting styles are like. But on the whole, I still feel like we share a very deep common ground and a large web of support with many faces. We try to see each other for the ways that we are different and revel in the fact that this difference enriches our child.
I think our queer family has given our kid the space to express themselves and to figure out for themselves who they are becoming. I am sensitive to not projecting what I want from the world onto my child; rather I want to give them plenty examples of the dynamic possibilities of the world. It is my job to affirm the positive gifts my kid has to offer.

Around two years old they already started expressing ideas that they were a mädchenjünge—which was a word invented by them one day at kita. I took a liking to it right away, as did my coparents, which is why around three years old we started referring to them with gender neutral pronouns. They have continued to use this self-definition with increased regularity and they are now four years old. All our family are mädchenjünge, right? They once asked me. Right, I said, We are all queer bodied people. Dada, they say, maybe one day I’ll have a penis. You can get one too—if you want.

My kid knows there are a lot of possibilities for them in the world as it relates to their gender(ed) identity, but they also understand that the world doesn’t always get that. They are beginning to understand what “many” people in the world think. They are learning to see what some kids will think of as weird. And at the end of the day, they might come home angry with us for having this queer kind of logic, mostly because it forces them to field so many questions. What are you? Why do you want to play the papa? Who are your parents? They are forced to answer who I am—What is a dada?–when other kids learn there is “only” one mama and one papa. They have to learn the language to say, “I have three parents” and to stand up for themselves. What my kid understands is that many many many things are possible—but they are seeing that there might be a social price to pay, and it might hurt sometimes.

That’s where we parents come in, each and every day, to support each other through that, to affirm each other and to see each other. So, we are stumbling along, failing sometimes, learning, making better choices towards what we want next on this very queer and unique day. 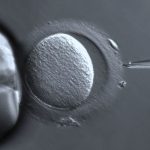 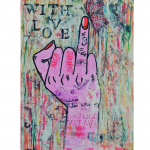